Family, Fatherhood, Gay, Homosexuality and The Church of Jesus Christ of Latter-day Saints

I recall vividly the very first time it dawned on me that a Mormon Apostle could be and indeed WAS full of BS.

Let me take you back in time…

I believe it was April General Conference 1993. I was 28, unmarried, closeted, BYU grad, returned missionary, former MTC instructor and zone leader, working full time teaching English as a Second Language and taking graduate courses in Linguistics. I was active LDS and the Ward Executive Secretary in my single’s ward.

In fact I’d never really doubted. Oh, I had a few things I’d tossed up on that testimony shelf where you put things that just don’t sit right, but I was all in. Certain things about LDS “culture” rubbed me the wrong way, but I was hardly skeptical by default. I was even one of those priesthood dorks who actually paid attention to the talks.

One particular talk by Dallin H Oaks called The Language of Prayer at first glance seemed pretty innocuous.  He was just saying that the church teaches us to use honorary, respectful language in prayers. Pretty harmless, right? The message was OK. But if you know anything about linguistics the reasoning he articulated was absurd. He’s just plain and simply wrong about the language. His logic was completely circular and made no sense. If you’re curious, here is an analysis.

My point is that he was trying to sound like an expert about an area he clearly knew nothing about. He was as bizarre as Ben Carson talking about the Pyramids. If he was a mouthpiece for God, then God was a moron.

This mattered a great deal to me at the time. I tried to talk to my roommate about the problems in the talk, but that hit a brick wall. I waited for the next Sunday to see if anyone else would want to talk about the silly talk… all I got were crickets.

I walked away realizing that: 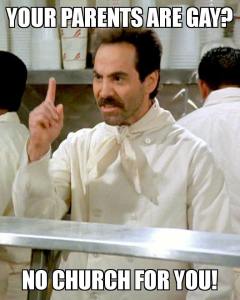 Mormon leaders are wrong about gays. They’re wrong in the way they are dealing with children of gays.

They are wrong in a very fundamental way. I won’t be able to reach the analytical prowess on this topic that a gazillion other blogs will over the next few days, but I know that Mormon leaders are wrong and misguided and selfish…

That last part really means something to me right now. I have been having a really difficult time lately finding places I fit in and finding a community. I don’t have a group of gay friends here like I did in Palm Springs. When I’ve attended Ex-Mormon events in town I’ve felt accepted, but never quite found friends.

It’s really just me and my kids right now and so this new “Children of gays” thing feels evil and personal to me.

But today I’m touched by the indignation and emotion expressed by straight folks, fellow ex-Mormons and the usual allies at the various social media sites I participate in. Thanks you to any of you reading this…

Just understand that that horror and disbelief you are expressing today encapsulates my general reaction to how the church taught me to think about myself for 40 years. Pretty sick, huh!

I have tons of questions:

There’s a whole lot more I could say. And as I’m typing this, there’s some mock interview being posted of one of the apostles defending the church’s divisive policy. They got the guy with a gay brother to be the point person on bigotry towards children of gays. NICE.  I’ll watch it…

Here’s what I can tell you… the word “clarify” does not mean what they think it means. And…

That last part is the only part that matters to me today. It’s the part that is going to make Mormons look like the short bus of religions in the not too distant future.

One last note on your way home tonight, Mormons! Don’t forget to turn your clocks back 50 years. 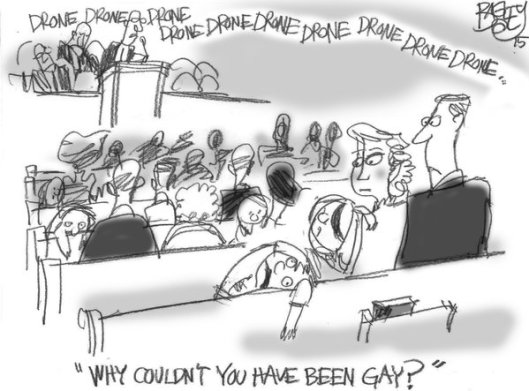 7 thoughts on “Children of Gays and Mormon Credibility”